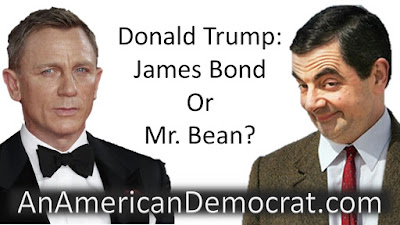 Most of us have been watching Donald Trump since he came down the escalator in 2015.  Prior to that I dismissed him as a silly New York playboy.
I have come to realize that there is something really strange going on here.
He is either a sly genius like James bond or a lucky buffoon like Mr. Bean. Many of my friends see him as "Bond... James Bond."  He looks good, has beautiful women, drives in fancy vehicles and lives a life of absolute splendor.  On the other hand, good things just happen! These lucky, seemingly uninfluenced events really seem to help him prove his point or keep the things he wants to talk about, alive in the media.  Serendipity happens to everyone, at some point in their lives, but it is a once in a life time thing. Like Mr. Bean, Donald Trump is extremely lucky.
You may think of a couple examples yourself.  My favorite was what happened two weeks after he announced in 2015.  The media was all over him for what he said about those murderous Mexicans and the need for a wall. Within 2 weeks of this speech, a young woman was murdered in front of her father, in sanctuary city San Francisco by an illegal Mexican.  The media could not talk about anything else.  This catapulted him to the number one spot in the 17 person race for the Republican nomination and he never lost this position.  Is this Bond or Bean?
Trump needs an enemy, just like Bond, in order to shine.  Whether it is Rosie O'Donnell,  Crying Chuck, Crooked Hillary, Sleepy Joe, or any of a couple dozen others, he uses these people and their reactions to sell his ideas. Is this Bond or Bean?  Then he beats his enemies over the head and they respond with exactly what he needs to stab them again and again.  Is this Bond or Bean?
Think about it.  Who is Trumps biggest enemy right now?  The Democrat Party and their acolytes in the American media.  So, what does he do?  He elevates the most extreme out of touch members of Congress:  Representatives Alexandria Ocasio-Cortez; Ilhan Omar; Ayanna Pressley; and Rashida Tlaib.  Nancy Pelosi has tied herself up in to knots wringing her hands, as the entire news media has elevated these for freshmen representatives to be the face of the Democrat Party.  Meanwhile, Trump takes every available opportunity to say how bad they are and why.  These are easy targets for Trump to knock down like a professional bowler. The press just eats it up as the American people agree with Trump.  Is this Bond or Bean?
There are many other examples.  Think about it. Re-post this article and include your comments.
I look forward to hearing from you.